A video appeared online on Wednesday, in which student and S&I candidate Nathan Lee gives tips on deciding who to vote for. In that video, he also discusses the student council debate, which took place on Monday around lunchtime. That same Wednesday, the video was removed and replaced by a video from which Lee’s analysis of the debate had been removed. What is going on?

Before the elections, the parties agree on certain rules, the so-called ‘gentleman’s agreement’, which means that Student Council members and candidates do not speak negatively about each other. If questions are asked about other parties or the differences between parties, the motto is: talk about your own party’s ideas and refer the person asking the question to the other parties. It has also been agreed that candidates should not go from door to door to convince people to vote for their party and that they should not cover competitors’ posters with their own.

Back to the video. Someone filed a complaint that reached the Election Committee, which consists of one representative from each of the three student council parties. After the Election Committee discussed the matter, Fernando Gabriel of S&I called Nathan Lee and asked him to take the video offline. Later, the video was uploaded again, but without Lee’s analysis of the debate.

Daphne Louws is on the student council for VeSte. ‘The video was like a guide on how to determine who to vote for. That’s great because many people have trouble deciding who to vote for. But in the video, footage of the election debate was shared with commentary by someone from S&I. The gentleman’s agreement states that members of parties are not allowed to make negative comments about other parties, so the Election Commission decided to take that part out of the video and re-upload a modified version.’

Gabriel, who represents S&I in the election committee, then called Lee to ask him to take the video offline, which Lee did immediately. Later that Wednesday, Lee uploaded a censored version of the video without the debate analysis. On Thursday, Lee wrote a post on Instagram in which he petitions for more structured debates during Student Council elections. Student newspaper The Jester wrote a piece about the incident in which they write about the deleted contents of Lee’s video.

Gabriel understands that the video breached the agreement ‘to some extent’. ‘Because Nathan is part of S&I, VeSte considered the video a breach of the agreement. However, I don’t think that Nathan negatively expressed himself about the other parties. But he did speak about their ideas.’ The incident has made Gabriel more critical of the gentleman’s agreemeent, which he believes should be less restrictive. ‘I think there should be basic guidelines on how to have respectful elections, but I think the current agreement limits the possibilities for critique. There should be more room to be critical. If we want to be transparent and democratic, some criticism should be possible. Talking about each other’s ideas is also talking about what we do in the council. And discussing publicly stated ideals of the parties should not be a problem.’

Louws stands behind the gentleman’s agreements. ‘They exist because as Student Council parties, we compete with each other four days a year, but during the remaining 361 days, we have to work together within the council. It is nice if we treat each other fairly and respectfully.’ According to Louws, that does not mean that the candidates cannot discuss their positions with each other. ‘I encourage that. That’s what the election debate is for. But we all agreed: during the elections, everyone will talk about their party. We discussed this several times with the entire student council, so I still stand by it.’

Joël Kampen of CSF is not happy with the way things went. ‘Apart from the question of whether the gentleman’s agreements have been violated, the people who were in the video were not asked permission.. I don’t think that is very decent. Some candidates found the debate stressful, so it is unfair to put them on social media like that.’ Kampen thinks there should certainly be room for criticism. ‘The debate facilitates that, which is why we organise it. There, you can question and test each other’s statements.’ Although he is not happy with what happened, he does think it is a good idea to upload a video of the debate in the future. ‘But by the student council itself, transparently.’

Voting is possible until midnight. On Monday, the results of the student council elections will be announced. 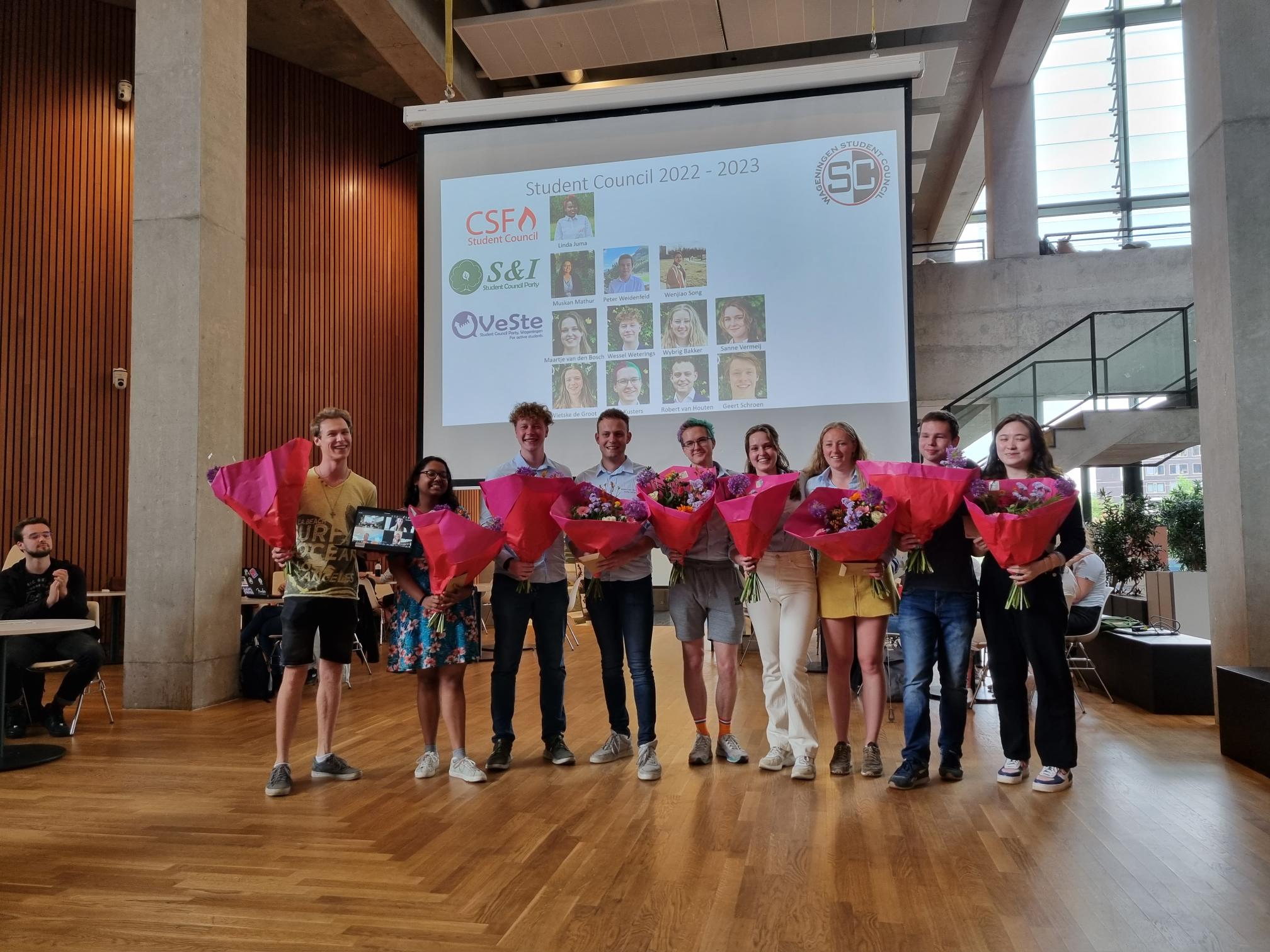 Growth VeSte at the expense of CFS 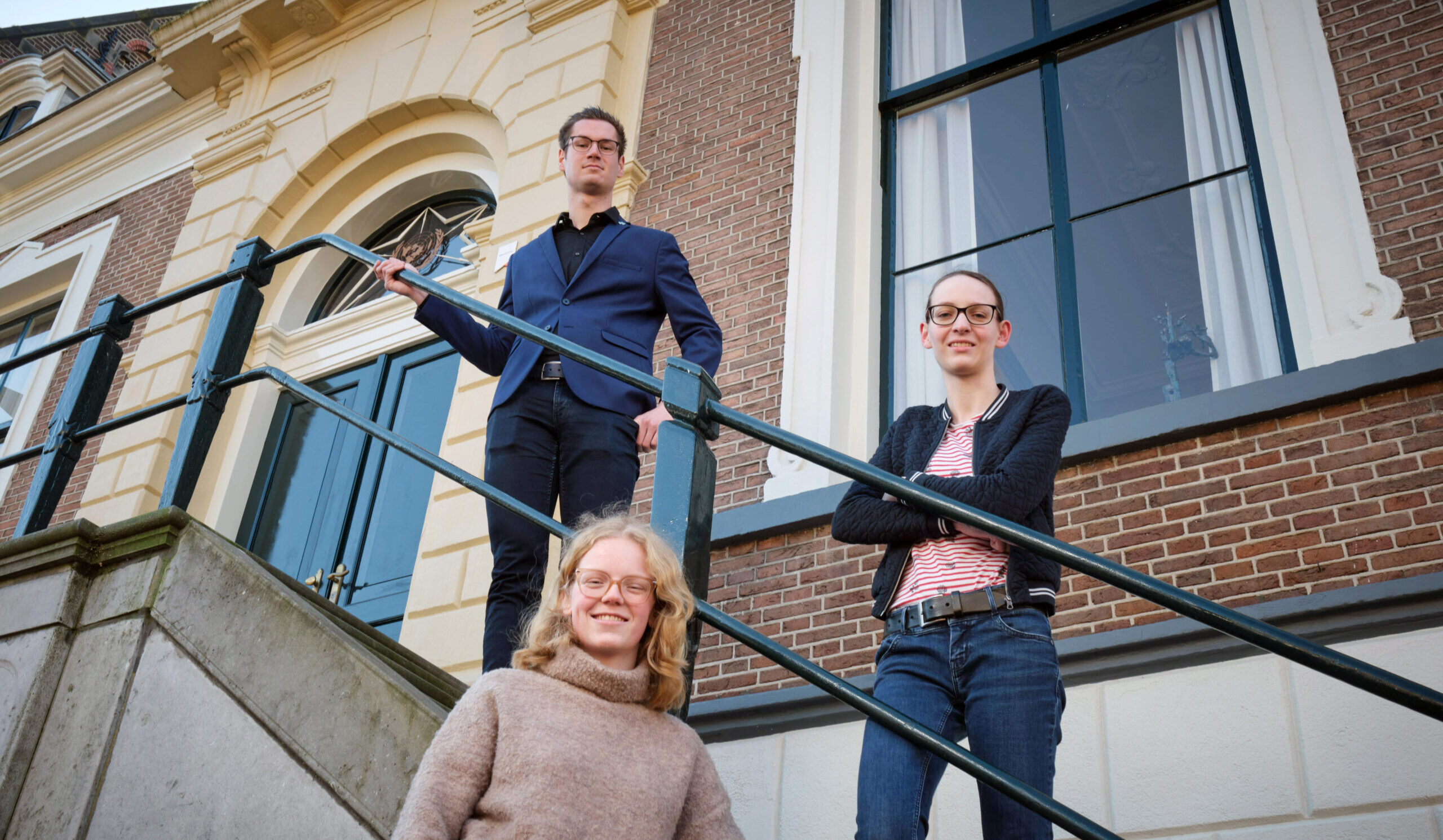 WUR students (back) on the council